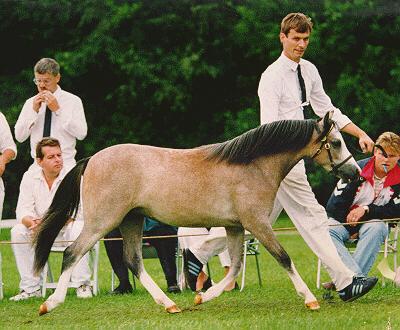 Sumrin Tatjana was the first foal of Sumrin Taru. We decided to take her to the young champion stallion Lange Voren Norman, who was really special. As a foal, Tatjana won a champion foal of all breeds at the Herveld show. As a yearling, she won her class at the regional show and was second at the national show. She then was sold to Mr. Platzer of Thrianta stud. Sumrin Tatjana has been a good show and broodmare for Mr. Platzer.

When Thrianta was stopping with A's, Mr. Droste of Voorthoeve stud picked her up.

In 1998, she was again second in a large class at the national show of the Netherlands in Kootwijk. In 1999, she was regional champion at the Tolbert show in Netherlands-North. Her son, Thrianta Silver Toy by Thrianta Silver Shadow was approved as a four year old and was best in his class.

Tatjana sadly passed away in 2015.