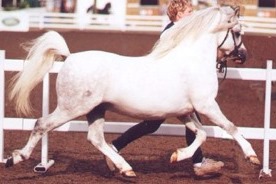 Dukeshill Magnum is somewhat a surprising stallion in this list, as we didn't even use him when he was available in the Netherlands. However, we used two of his sons, Rhesfair Joe Chwedl and Lowland Danny Boy with good success.

Magnum was already know as a prominent stock getter in Wales before we used his sons, he constantly ranks very high on the WPCS sire ratings and his stock has won many prizes. Magnum himself won the senior stallion class at the Royal Welsh in 2002 and has always been placed in the high ribbons at the Royal Welsh.

Looking at his pedigree, Magnum does combine some of the best Revel and Coed Coch lines. His grandsire Revel Playsome is a 3/4 brother to Vardra Julius, his granddam Revel Just Fun comes out of the Revel Jewel line. Through Magnum's sons, we got the first infusion of Sunwillow Bernina into our stud. Coed Coch Norman was perhaps the best Coed Coch stallion from the second era of Coed Coch.