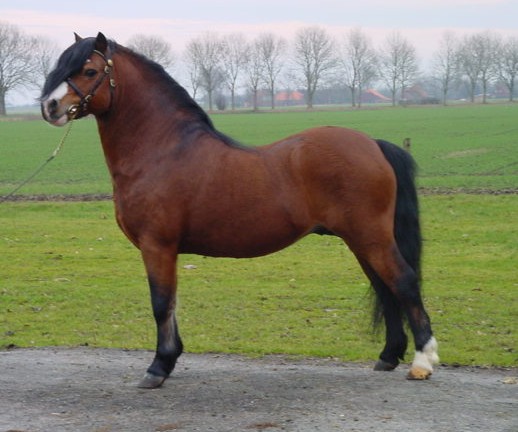 Sumrin Thor was born in 1993 in Lierop at Sumrin. He was something else, as he was the first bay foal we ever had of the line of Dyrin Tina. As a foal, he gained a first premium, where he was picked up by the family Maat of the renowned Kompas and Ruimzicht studs. After some years of stud duty, he was spot by the family Siemers in Germany of Leybucht stud, where he did bring successful stock, including some licensed sons for the Weser-Ems area.

We actually did take Sumrin Tessa to Thor, to produce Sumrin Teas. This made Teas the first ever foal at Sumrin to have two crosses of Dyrin Tina.

One successful line of Sumrin Thor in the Netherlands is that of his daughter Kompas Yvana, who is mother of Kompas Ylona (by Revel Paul Jones, a son of Dyfed Geraint). Ylona is a successful breeding mare in the province of Drenthe (north Netherlands)