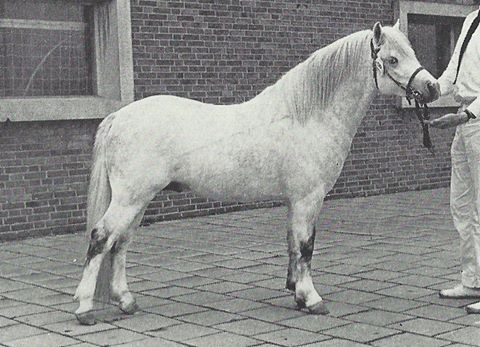 Leith Popover won his class at the NWPCS stallion inspection. Therefore, he was also a very popular stallion in his days, until fate struck when his progeny inspection was due (progeny inspection was something that was inspired by the Horses Act of 1939, describing how males needed to be selected for any breed). His owner, Mr. Bouwmans was so confident that Popover would pass due to the great results of his offspring, that he showed every single individual offspring. The veterinarian did find some irregularities with some of his offspring and concluded that they must have inherited it from their father. Hence Popover's license was pulled. This to the dismay of a lot of people, for instance the later chief judge, Mr. van Arkel tried to purchase him the day after the report came in. But Mr. Bouwmans stated: "too late, he is gelded already". In those days, it was hard to market offspring from a stallion whose license had been pulled (ditto for instance Revel Caruso's license got pulled, which is interesting regarding his influence to the breed), so few descendants of Popover remained in the population. We bred two foals by Popover: Sumrin Titus out of Dyrin Tina, who was gelded when it was clear his dad was no longer licensed and Sumrin Smaragd, who unfortunately died young. Mares that did have an influence were Miranda, out of Belvoir Magnolia and perhaps Biesdeel's Janet out of Gorsty Mistwyn. Miranda was born in Lierop, not far from Sumrin stud at Harry Verberne's place. Her daughter Iris was the only pony to beat Sumrin Tiara as a youngster, and that was at the national show! But at least the prize stayed in Lierop. Iris is subsequently best known today as the great-granddam of the successful stallion Pauwhof's James.